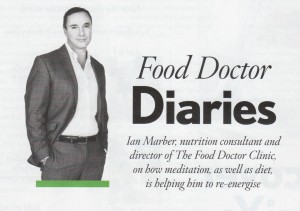 Ian Marber is the UK’s leading nutrition consultant and director of The Food Doctor Clinic. He’s written loads of best selling books and you may have seen his range of fantastic products in the supermarket under the brand “The Food Doctor”. He is a busy man – TV shows, writing columns for magazines, launching books and meeting with clients in his London consultancy. So it was no surprise that he was looking for a way to balance all that activity with some quiet time for himself. Hence his interest in meditation and so it was a real pleasure to be a part of his process of discovery into this area.

I have been trying to meditate for some time, with varying degrees of success, and am glad to report that with the help of a gifted teacher, I am meditating daily and finding my mind is calming and my energy is noticeably enhanced.

I do tend to be more than a little cynical, and the idea of meditating had a slightly new-age feel to it that previously made me suspicious. I knew that I would struggle with meditation if it became too mystical. (Until the end of last year, I couldn’t see meditation as anything more than a power nap – how wrong could I have been?!) I chose to work one-on-one with the wonderfully named Jillian Lavender at the London Meditation Centre. The course I chose consists of daily two-hour sessions for four consecutive days.

Had someone told me on day one that, despite my mile-a-minute thoughts and innate cynicism, I would be successfully meditating by day two, I simply wouldn’t have believed them. There are group classes and a weekly gathering on a Monday evening where people chat and meditate and although I have yet to attend, I am told that it’s incense-free and down to earth. I am meditating twice a day, for no more than 15-20 minutes, and I can report that I am calmer and my thoughts are clearer, less random and more manageable.
Rather than the surges of energy I used to feel (that were invariably followed by fatigue), through simple daily meditation my thoughts are more ordered and fruitful than ever – and aren’t sapping my energy. Instead I am harnessed and focused, and feel as if I am in charge of the mind chatter – not the other way around. I am sure that there are other ways to achieve something similar, perhaps through yoga or massage, getting enough sleep and eating well,but if you’ve tried them already and still find your energy levels are low, you might consider meditation. I feel that the benefits are only just starting to become apparent to me, and as long as I can maintain my daily ritual, I am confident that i am on the right track.