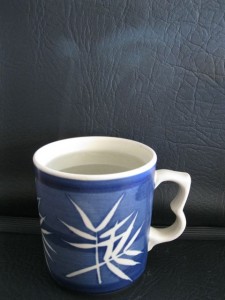 Due to a newly released study there’s been a lot of discussion in the media about how much water is good for us. On Saturday 23rd July there was an article in the Guardian newspaper questioning the ‘8 glasses a day’ rule and the underlying assumption that the more water we drink, the healthier we will be.

Accompanying the article was a picture of celebrity chef, Nigella Lawson sipping on an iced water (more on that in a minute), who was recently outed as an ‘acquaholic’ who drinks several litres a day.

Claims on the British Medical Journal website that “evidence is increasing that even mild dehydration plays a role in the development of various diseases” are understandably open to questions when their own Hydration for Health campaign is found to be sponsored by Danone (owners of Evian, Volvic and Badoit).

So, how much water should we drink?

Actually it is more an issue of quality than quantity. In particular, cold water is going to be more difficult for the body to absorb – hot water will be assimilated by the body much more quickly and effectively.

I saw this on a recent trip to India in May (very, very hot) where I met a woman who prided herself on being very healthy by drinking lots of water. However despite drinking litres each day she was complaining, “I can’t drink enough and yet I’m always thirsty. I don’t know what’s wrong with me?” She had noticed me sipping away on my mug of hot water and wanted to know why, in the 45 degrees Celsius summer, I was filling my body with more heat!

As my Ayurvedic doctor explained when I first discovered the virtues of drinking hot water, it is a question of absorption. Water that has been boiled and is then drunk warm to hot is going to be absorbed more quickly by the cells of the body. It is also going to be more balancing for the body. As soon as this woman started drinking boiled water her constant thirst went away.

According to Ayurveda, just as we get maximum digestibility from our food by cooking it, when we cook water by boiling it, it will be more quickly and effectively digested by the body. It will be more nourishing and balancing.

Imagine a blocked drain that is clogged up with gunk. Hot water is going to be more effective than cold water in clearing out the blockages. In the same way, our body is made up of millions of super fine channels (called shrotas) that over time accumulate toxins, fatty deposits and the residue of undigested food. The most effective way to clear this unwanted toxicity out of the body is to flush hot water through the system and allow the intelligence of the body to flow without obstruction.

Our digestive power depends on our ability to burn up the food we consume. If our digestive fire is burning well, we will be able to convert food into energy without building up a storehouse of undigested food that very quickly turns toxic in the body and leads to disease. So coming back to Nigella, sipping on her iced cold water… it’s like dumping a load of iced water on a fire. The flame goes out and then the food (and water) that is consumed is unable to be processed and remains in the body as toxins.

A couple of side notes:
1.  Often people ask if herbal tea is the same as drinking hot water. As Ayurvedic physician, Dr Raju has pointed out: “You don’t wash your hands in tea or bathe in tea or wash the dishes with tea”. There is nothing wrong with drinking herbal tea, however for this reason I recommend starting the day with plain hot water to get the maximum purifying effect for the body and then you can move onto some herbal tea if you like.

2.  Today 56bn gallons of bottled water are sold every year – that means A LOT of plastic bottles that are clogging up our planet. It’s time to recycle your water bottle or even better, buy one of those non-plastic bottles that can be used again and again.

7 responses to “how much water is enough?”